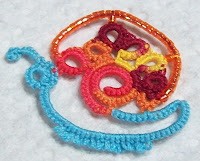 Sunday was a day of cleaning up and finishing stuff.  I cleared out a bunch of pictures from the photo gallery on my computer.  To get one decent picture you take quite a few and there were lots of redundant photos on my computer.  So I erased ones I don't need and hope that I don't regret erasing them.  I also fiddled around a bit and made a few more snails.  Its interesting how different color combinations can completely change a pattern.  I think the snail with the blue body is better than the brown I used in the last post.  I plan on adding another twist to the pattern but haven't tried it out yet. 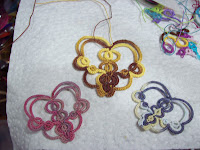 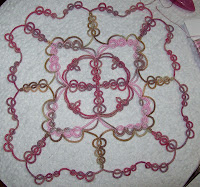 I've also spent the last few weeks obsessed with a particular motif in tatting.  In my head I call it a dagger because its made of a series of rings and chains that get smaller until it comes to a point.  I was working on a pattern before Christmas that involved this motif but lost the doily and thread somewhere between Ottawa and Campbellford.  I worry that it fell out of my car.   Last weekend I started playing with it again and ended up with these hearts and a square doily that's slowly forming.  The heart at the top is done in Tat's Kool's mango chocolate.  I love the shading in this thread from brown to yellow, unfortunately that doesn't show up in the picture.  The 2 a the bottom  and the square doily are done in Lady Shuttlemaker's (Sherry Pence) silk thread.   I lucked out this week because Sherry sent some thread as a Thank-you for some thing I sent for Picadilly.  Sherry was too generous and I feel like I should send a thank-you for the thank-you.
I'm going to use Sherry's thread to continue a few more rounds.  I've had to stop and take a break because I was getting stiff but the doily is currently 61/2 inches.  The nice thing about silk thread is its ability to slide which means decreased friction while tatting.  You don't notice this until you go back to a cotton thread and then you feel the drag.  I can tat more with the silk thread before my hands start to stiffen from overuse.
Posted by victats@gmail.com at 2:22 PM