Friday morning at 6am I fell out of bed.   Yep, wasn't doing anything fun just turning off my alarm clock.  You see I have an antique bed that takes a 3/4 mattress but I use a double mattress.  So the mattress hangs over the edge on each side when you've just placed it but shifts to the whatever side you get out of bed.  So when I rolled to turn off my alarm clock I slide right off the bed.   I have a huge bruise on my right arm where I hit my nightstand, my butt hurts and my wrist is achy.  I suspect it would have felt worse today except I got adjusted and had a 20 minute massage on Friday pm.  Both really helped but I can't wait until tomorrow when I'll repeat the treatment.  I'm also taking Traumeel which is a homeopathic anti-inflammatory.
Bad timing since I'm helping another Chiropractor whose been injured.   She hurt her wrist so Salima (chiropractor I work with) and I are filling in while she heals.  This means I working twice as many hours as usual.  Being a Chiropractor is physical work and you often break a sweat.  So I'm already a little tired and sore already.
Apparently you can have a mattress custom made and its not too expensive.  I think that after this I'm going to be looking into getting a mattress that fits.  I don't want to slide out of bed again.
Posted by victats@gmail.com at 11:45 AM 2 comments: 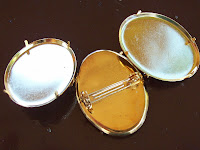 ﻿﻿﻿﻿Whenever I go into a bead or fabric store I always look for a brooch base.  Its easy to find them on-line but I never see them in stores. I finally found some at McNare Beads here in Ottawa and bought a bunch.  Basically you use glue to add stuff to the base.   I'm hoping that this style will sit better on a shirt.  I hate it when they tilt forward, the brooch looks like its trying to jump off your chest!

You may not have noticed but burlap is pretty trendy right now. This was confirmed last week during a trip to Starbucks where I noticed that one of the wraps in the travel mugs was burlap. This was definitely a sign. It would be a great time to share how to make burlap angels but alas, a trip to Micheal's is needed for that particular craft. Sometime before Christmas I'll share it. My Mom and I made over 30 burlap angels 4 y 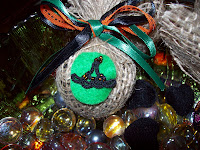 ears ago for friends and coworkers at Christmas. We made another 20 the next year because my sister changed jobs and had new people to gift them to.

Instead I made a trip to Canadian Tire and purchased a pack of garden burlap. Some styrofoam balls and a few ribbons later I made this Potion Sac. I had to let it sit for a week before I decided to put on the felt label with the witch hat. It took me awhile to realise it needed more color, Burlap can be so dull. Tonight I'm making a bunch with different labels. One of the patterns I'm going to use is Ellen Lai's Owl and one of the skulls from Martha Ess's Halloween Bling Bracelet. The Styrofoam balls are white and can see through the burlap so I improvised using the black scoop poop bags I had from the dollar store! 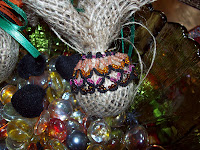 This second idea didn't turn out quite as nice as I hoped. Last year I made a few of these ornament covers and put it on a clear ornament with spiders in the bottom. I hung the ornaments on an arrangement of dead branches. This year I thought that the burlap might show of the colors more so I wrapped another Styrofoam ball and slipped on the cover but I think its too bulky and drab. I guess I'll pull out the clear balls. You probably have already guessed that Yarnplayer inspired the ornament covers with her experiments to get a stained glass effect. 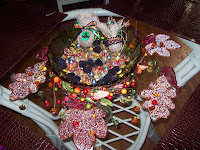 Big plans tonight finishing my fall decor. I try not to get too morbid too early so I'm using a lot of leaves. Lots of time for more grotesque stuff as Halloween gets closer.
Posted by victats@gmail.com at 2:05 PM 2 comments:

I love this idea! 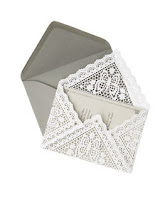 Once again I was following the link trail from blog to blog just wasting time. I do that from time to time to check out all the neat ideas out there. I came across this blog where she shows how to make envelopes using paper doilies. I thought this is a must have idea for anyone who makes lace. You can send all your creations in appropriately Lacy envelopes. Now where can you find paper doilies that come in a square? The ones I've seen are usually round.
Posted by victats@gmail.com at 7:48 AM 5 comments:

Not what I planned...

I had planed to post something different today but I didn't have the essential material needed to complete my mad inspiration. So a visit to Michael's is needed before I share my idea. This is unfortunate since I've already spent all my buttons on beads. Pretty, pretty beads that I thought I desperately needed...can't have too many Delicas can I?
Its okay but it spawned another idea that I can't complete since I don't have that material either. Fortunately, I think a visit to Canadian Tire may produce the burlap needed and the dollar store is a good source for Styrofoam balls.
It's all worked out be 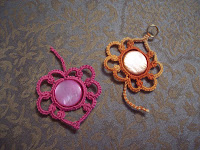 cause I realised that I didn't share something I had planned on sharing earlier. You know those flat, round shell disks that you often see in the dollar store? Well, I found a seasonal use for them- leaves (Leaf on a Shell Bead). You can substitute another bead or just skip the bead entirely by changing Ch1 to R 4-4-4-4-8-4-4-4-4 or a mock ring with the same count.

I also thought that the motif looks like a Chinese lantern (the plant).
Posted by victats@gmail.com at 12:30 PM 5 comments:

I finally have discovered the magic of Keep and Share. This program allows me to create a link to my patterns online. This means that you get them in a nicer form- a word document. On the right hand side of the screen is a link to the Bear Heart Pattern. Just click to download the file. I will be gradually changing over all the patterns posted on the right hand side of this screen. Let me know how this works for you.

Last week I had a quick (20 minutes) tutorial from a 16 year old about everything I needed to know on my computer. Adil is not only a smart kid but he's able to communicate. A trait not often found in exceptionally smart people and one I value. So Adil set me straight on a bunch of things and hopefully I remember about 10% of the useful stuff.
Posted by victats@gmail.com at 1:12 PM 3 comments: