Instead if doing what needs to be done...

I should mow my lawn.

Posted by victats@gmail.com at 4:43 PM 7 comments:

Okay so the 1st rule of tatting with bobbins has to be: put the right bobbin with the right amount of thread on the shuttle.  Lesson learned... 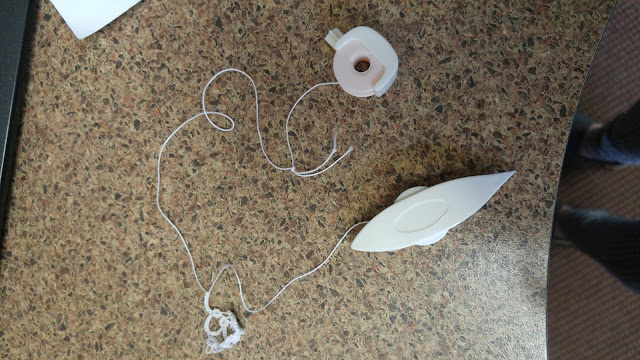 Posted by victats@gmail.com at 7:10 AM 3 comments:

I broke down and purchased the new clover bobbin shuttle and the case that goes with it.  I blame the online tatting class and their review of the shuttle.  They made me do it.
I purchased my shuttle and case  online from Artisanthropy which has both an online store and a store front located in Cobourg, On.  They were one of the vendors at the Fringe Element Tatting Seminar last year and I love their colour palette.  Hopefully they will cary Lizbeth thread in the future.  I was surprised to find that they not only have the Clover bobbin shuttles but have free shipping on orders over $40 before tax.  Although there are great tatting stores online they are mostly in the US and its painful to get a package over the border and timing is unpredictable.  It took less than a week to for the order to arrive at my house and it was delivered to my door. 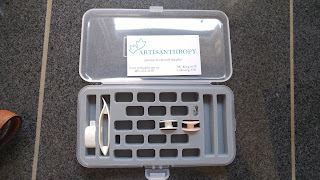 I really like the idea of the tatting case with the slots for the different items.  It helps to keep things from tangling and the crochet hooks can't puncture the case.  It is lighter and thinner than the plastic pencil cases from the dollar store.   The shuttle itself feels like the traditional clover shuttle but a little bit bigger.  I have over used the post clover shuttle and now have issues gripping the clover post shuttle.  I didn't have that issue with the bobbin shuttle.  The bobbins are easy to use and they pop in and out with no issues.  I like the pic on the tip of the shuttle.  The design is overall a win and fits in with what you would expect from a clover shuttle.  I have to say that I find them pricey compared to other plastic shuttles.   Even though a bobbin shuttle allows you to change out bobbins so you can use one shuttle to do several projects the bobbins themselves are pricey compared to other bobbin plastic shuttles.  Overall its a good middle of the road type shuttle where you aren't spending a fortune but you get a really nice shuttle.

Posted by victats@gmail.com at 7:16 AM 6 comments: