I came home on Monday afternoon to find out I have no water!  The extreme cold has finally sunk deep enough that some of the pipes in Smiths Falls, Ontario are frozen.  I'm scheduled for them to check it out tomorrow since some one needs to be home when they check it out.  I'm afraid they will need to dig up my driveway since that's where the water comes into the house.  Cross your fingers that I will have water tomorrow around this time!

In other news I borrowed my sister's camera to take pictures of bracelets I've designed.   My iPhone just isn't cutting it in the photo department.  The pictures are for a book of bracelets I'm trying to get done.  It feels like its taking forever to complete.  Its mostly my fault because instead of proofing patterns I've been coming up with new designs after I walked into Canada Bead Supply at the beginning of the summer.  I blame the rest on those ingenious bead manufacturers that are supplying such neat beads!

Posted by victats@gmail.com at 2:18 PM 3 comments:

It may be a little late to do a post about Valentine's Day but I'm going to do it anyways!  My niece Olivia received her heart pin in the mail on Friday so she got to wear it Valentine's day.  My other niece and nephew are still waiting.

On the weekend I did something really romantic...I went to the Diefenbunker!  If you don't know what I'm talking about here's a quick blurb from the museum website:
"The Diefenbunker was commissioned by Prime Minister John Diefenbaker in 1959, as part of his government’s reaction to escalating tensions in the Cold War. The purpose of the bunker was to house key members of the government and military in the event of a nuclear attack on Canada. The safety of its nuclear roof would allow the Canadian government to operate safely underground for 30 days in order to assist with the governance and rebuilding of the country. A series of Emergency Government Headquarters bunkers were built across Canada and, as the largest, the federal government bunker would come to be known as the Central Emergency Government Headquarters (CEGHQ Carp)."
...or you can go to http://www.diefenbunker.ca/rustic/bunker_video.php?langID=en for an original video by the Cold War Era Government.

So basically we have an underground city built on the outskirts of Ottawa in case of Nuclear strike.  Since the passing of the Cold War its been made into a museum simply because its too neat (and too much tax payer's dollar were spent) to just shut it up and forget it.  To get in you have to walk through this enormous tunnel which is pictured below (it was waaaayyyy too cold on the weekend for me to stop and take a picture so this is from the website)

For the first few minutes its a little claustrophobic but once you get inside its just like an office building with no windows.  I wasn't sure at first if I could stay.  I took a few pictures of the medical clinic which is the first stop.  We only saw the first floor but then left because an hour had already passed and I was really hungry!

Posted by victats@gmail.com at 4:55 AM 2 comments: 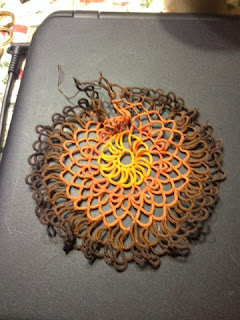 This is what happens when you combine an inquisitive dog with a low lying table!  This used to be a doily design by Karey Solomon but now it has a big bite missing.  Unfortunately Lucky managed to chew through all but the first round so I'm not sure what to do about the missing parts. While this is a small doily it too a long time to tat because it's so dense.  The pattern has a lovely swirly nature and sadly wasn't finished.  There is one more round that was waiting for me to decide on a color.  So sad for it to end up this way and such a bad dog!
Posted by victats@gmail.com at 12:48 PM 6 comments:

I finished the brooches and packaged them so they look pretty and they are all ready to go! This brooch and a few others are being mailed to my nieces and nephews for valentine's day.  I thought they could stick them on their backpacks. 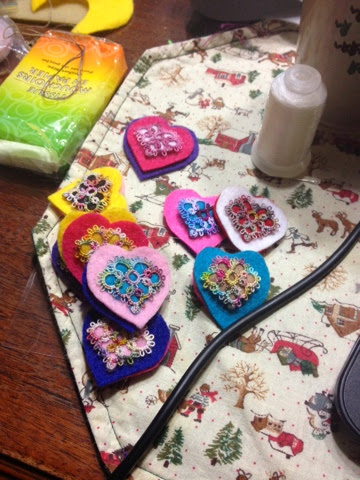 I'm making these brooches as a donation to Millers Oven in Manotick.  It is a not for profit restaurant that raises money for the senior center.  Except for the cooks all the staff are volunteers and the food is  made from scratch.  They make the best whole wheat scones and I pop in for a shone and a pot of tea regularly.  It's one if Manotick's little treasures.
Posted by victats@gmail.com at 5:21 PM 3 comments: