Tatting at Fours and Sixes

Gentle Tatters,
We're going to be home a lot more in the next few weeks. Social Distancing requires that we don't congregate in person but it doesn't mean that we can't come together through other means. Don't forget that we have email, facebook, chatsy, instagram, other social media and even the old fashioned telephone.
We can still come together and tat.
IF you are looking for tatting patterns and supplies we have terrific online shops like Handy Hands, Tatting Corner Artisanthropy, Be-Stitched, Roseground (I'm missing a lot on this list)
-Money might be tight but there are a million tatting patterns for free out on the interet. Check out the pattern library that exists on Craftree, thanks to Kersti Anear for buildling this site. The Ice Drop Addict facebook group has over 81 free Ice Drop Patterns.
- the online tatting class webpage has over 20 years of tatting classes you can tat your way through lesson by lesson
-consider tatting a 6 ring flower for the Celebration of a Classic Wall hanging for the Palmetto Tatting Guild Fundraiser
-I'm adding an unfinished collection of patterns (no pics of the finished project, they're at the cottage) called Tatting at Fours and Sixes to the files of various facebook groups. Feel free to download it, tat the patterns and share pics.
It's just for a short period of time that we need to be more careful.
Let's take this opportunity to celebrate our craft together! 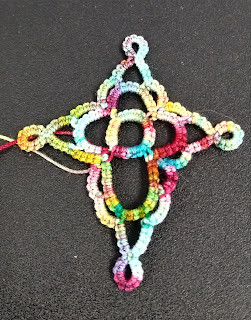 Posted by victats@gmail.com at 8:12 AM 5 comments:

I cut a picot by accident on my Renulek Spring Napkin 2016.  This happened when I was careless about putting the doily away after tatting on it.  It was fairly stable so I debated about leaving it alone but finally decided to fix it.  Here are the steps I took to do this:
1.  I unpicked the ball thread from the core thread so I have a small tail on either side of the core thread.

2.  I pull a length of thread and used a needle to wrap the stitches around the core thread starting from the left.  I left a length of thread so I could come back and sew in the new ends.  Apparently I didn't take a photo of that.  I covered the short tail on the left at the same time.

3.  Join to the ring in the next row by going through the stitches that made the original join
Then I stitched in the new right sided tail

5.  Then I went back and sewed in the new left handed tail.

I'm sorry I didn't take more pictures of that.  I thought I was taking too many pics at the time.

Good news, I made a mistake a few rows back in the Renulek 2019 so I can take more pics of fixing mistakes without cutting back.....