Something a little different 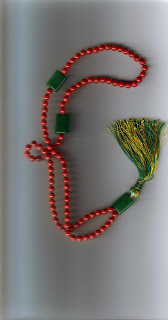 We were cleaning out the junk that tends to pile up in the clinic. One of the things we found is a bag that Salima (other Chiropractor in the clinic) was going to take home and never did. It had been in a drawer since Christmas. When she opened the bag it had what I made her for Christmas-Tasbih (Muslim prayer beads) . She's Muslim so you may find it strange that I give her a Christmas gift but we don't think about it that way. I had forgotten about them but I'm happy to say that seeing them again I was impressed. The Tasbih have 99 beads with every 33 beads separated by a different bead and a bottom bead and tassel. Ideally the top bead has a certain shape to it but often people use a larger bead or series of beads.
The red and green Tasbih is made out of red fossil and green quartz. The tassel is green and gold. I choose those color because they are important colors for a big holiday. Semi-precious stones tend to be heavy and have smaller holes so they tend to break the thread holding the Tasbih together. This is meant for special occasions. 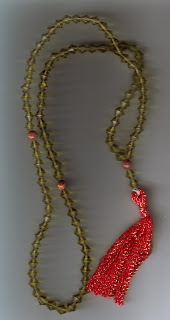 I'm not sure if it shows up but the next one has green glass beads. I used goldstone beads as the separators and put a red tassel on the top. These beads have larger holes and are lighter. This Tasbih could take a lot of abuse and not break. 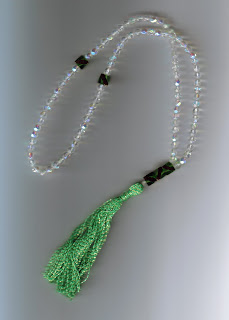 I used smaller beads here to make a smaller Tasbih. Again the beads are glass so its lighter. You can't see it but the separator beads are polygons (does that work in 3-d?) and there is a band of gold on them. Green and White are the colors of the Aga Khan who is the the Ismaili's religious leader.
Anyways, I thought I would share this with you. I can't share any pictures of what I'm working on right now. Unfortunately, the summertime exchange package I sent never arrived at its destination. I'm trying to remake what I sent but it's not going well. It's taking forever.
Posted by victats@gmail.com at 8:36 AM No comments:

Definition: a fundamental change in approach or assumptions

I think that I just experienced a paradigm shift in the way that I approach my tatting. It was my opinion that tatting has neither a front side nor a back side so I never bother with front sided/back sided techniques. Most people that I give my tatting to would have no idea which side was up or down so really front/back sided techniques don't apply. In fact, one of the charms about tatting is that there is no obvious front or back unlike say...knitting. Sure, tatters may notice the difference, but the average person won't. I also like the fact that I can just flip a doily if it gets a fleck on it.
However, today I voluntarily changed to front side/back side tatting for a pattern. Why? Well, some things by their nature have fronts and backs. Oh say...an amulet bag. You have an inside and outside portion of the bag and you can't just turn it inside out and have the same thing. Another example is the rosette which by the nature of the joins looks different on the front than on the back. So, I have decided in these cases to use front sided/back sided techniques. This is a major change for me since it changes how I look at patterns and the double stitch. It also makes things a little more complicated. Crap!
Posted by victats@gmail.com at 9:46 AM 3 comments: