In a previous post I mentioned working on an entry for the Palmetto Guild's Tat Days 2009 logo contest. This year the theme is "I've been bitten by the Tatting Bug" so I thought about it for awhile and sent in my entry which I call "the Culprit". Guess what? My design was chosen! Yay! I'm so happy!
You can check it out on their website at: http://www.palmettotatters.org/.
Posted by victats@gmail.com at 6:49 AM 9 comments:

The strangest thing happens whenever I make something for my friend Sal...it ALWAYS breaks! She has a thing with jewelry that curses any jewelry that I make her to break. So far, nothing I have tatted her has broken but pretty much everything else does. I could do the crappiest job on a necklace for someone else and it will last for years but anything for Sal breaks. To fight this curse I spend lots of extra time on construction and still things go wrong!

This week I made her a necklace similar to one I had made myself. Mine is hastily made with cheap clasps and it has lasted months...hers lovingly made with good quality clasps didn't even make 5 minutes! The clasp broke pretty much the minute she touched it.

This has happened many, many, many times over the years. You'd think I'd stop trying but I'm still plotting. One day I'll break the curse!
Posted by victats@gmail.com at 1:47 PM No comments:

Since the weather has been warmer I've begun to yearn for spring. I think flowers are the best part of spring because the colors break you out of the winter blahs.

A couple months ago Sharon Briggs posted a challenge on her blog to make something out of the basic rosette pattern. I've mentioned before I love the rosette and often use it as a base for other patterns. So with her challenge in mind, I came up with this flower one weekend. I wanted to see what I could do if I only added one more round. That weekend I made a crap load of flowers for bookmarks. No fancy thread, just some coats size 8 my sister picked up at a yard sale.
Posted by victats@gmail.com at 11:01 AM 3 comments:

Here in Ottawa it's a beautiful day. The sun is shinning, snow is melting and you can feel spring is just around the corner. BUT this is Ottawa so its going to get really cold before it gets really warm. Last March we had our all time biggest snowfall on record. I actually got snowed into my house!
I thought I would share a butterfly in honor of the beautiful day. I made it awhile ago and I don't really remember how I did some of it. I made it last year for an exchange but sent something else instead. I didn't like it at the time but saw it a few months later and thought it was great. I think it would be nicer in different colors.

More fun than it looks...

In December I showed pictures of some beaded snowflakes I made to use up thread. Jane Eborall 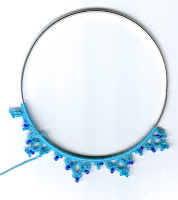 suggested way back then that I attach the snowflakes to bangles instead of stiffening them with glue. Of course, being a little bone-headed it took awhile for the idea to sink in. I tatted around a bangle for another project and loved it! So now I'm on a binge of bangle tatting. For sure I'm going to add the snowflakes to some bangles. Here's a blue bangle I'm covering to make a bracelet for a friend. Bangles are easier to cover than the small plastic rings because the shuttle can fit through the bangle. When you cover a plastic ring you basically tat as though making a split chain. A bangle is more like encapsulating.


Just in case you haven't done this before and because I'm so enthralled with tatting on bangles I'm showing how I do it. 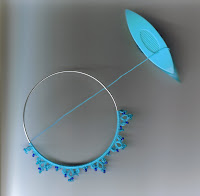 For the first half of the double stitch pull the thread behind the bangle to form a hole between the uncovered bangle and the thread.

Then bring the shuttle from front to back through the hole made by the thread and the bare bangle. 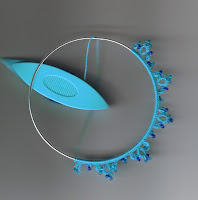 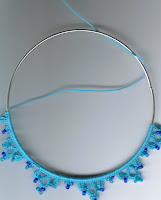 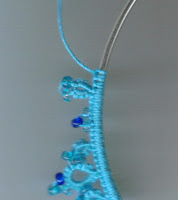 Pull thread up snug to form the first 1/2 of the double stitch. 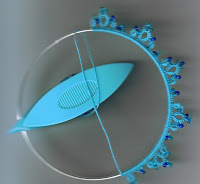 For the 2nd half pull the thread in front of the bangle to form another hole. Then bring the shuttle from back to front through the space.

Then snug up to form the double stitch. No flipping involved. Throw on some picots, rings and beads and you have a new bracelet.
Posted by victats@gmail.com at 11:41 AM 6 comments:

My excitement for the week was hitting a deer bang on going 100 km/h on Monday evening. The very good news is that I'm relatively undamaged and so is my car. The deer was not so lucky and hopefully died quickly. I live in Ontario and there's lots and lots of deer so I'm fortunate this is the first deer I've hit. The difficult things is you rarely see them before you hit them. My hood is dented and the grill is broke but that's about it...I'm very sore. Being sore always makes me a little bitter. Fortunately I'm a Chiropractor and I work with a very good Chiropractor so I've got the treatment of my whiplash covered.

On a brighter note, my order Boutique tatting arrived from Marilee. I also ordered some thread- Midnight oil and Winter blend. I am very happy with the package. The book is great, there's lots of pictures and she takes the time to explain anything that may be confusing. I haven't tatted any of the patterns yet, I'm hoping to get a chance on Sunday. The thread is great, her colors are always so vivid. Unfortunately I can't unwind them to use because I shoved my empty floss holders somewhere and can't find them. I've looked everywhere- they must be in a really safe place.

I've been working on a submission for the Palmetto tatdays logo. I wasn't going to this year but then it just happened. I'm finished and sent my scan in today. I'm very happy with my pattern and am looking forward to seeing other ideas. They are taking submissions until the 18th and its a fun way to challenge yourself.
Posted by victats@gmail.com at 12:24 PM 2 comments: