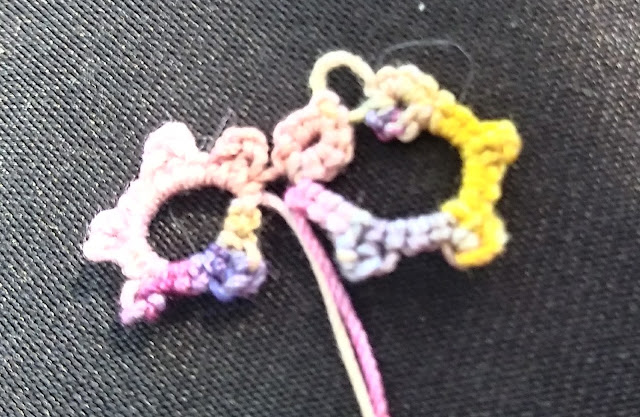 I made a lot of these lucky pennies at Christmas.  The pattern is by Carolyn Craig and available in the Ice Drop Facebook group.  The only thing I altered was to make dot picots instead of the center chains.
Pennies are not in circulation in Canada but my aunt Penny has been collecting pennies in a jar for years.  When she sold her house she gave the jar to my sister.  Jessica gave me a bunch of pennies so I could make them into lucky pennies.
Just fyi there are over 107 ice drop patterns in the group files! 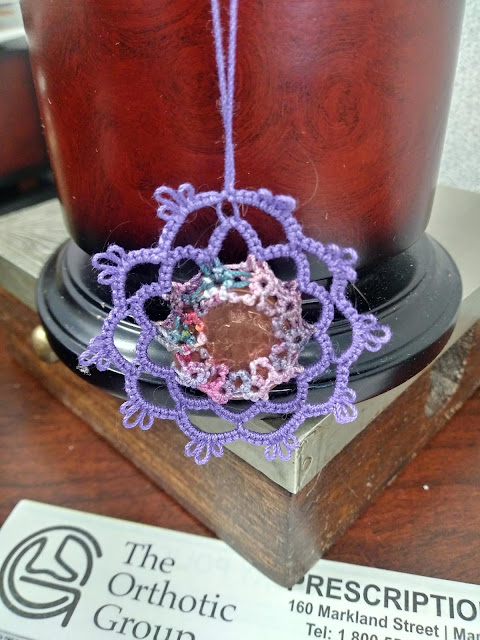 Brenda Spears kindly sent me a picture of her finished tat-a-long project!  Its so much fun to do something like this and see the finished projects.  I love the bead in the center.  Thanks Brenda for participating and sending the pic!

On another note I want to wish everyone a Happy Independance Day! 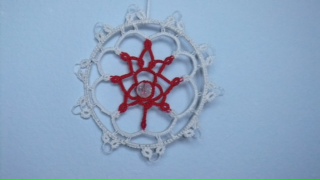 It is so very Canadian to remember our neighbors to the south! 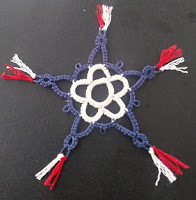 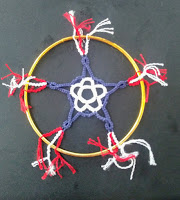 Pattern can be found here, or on the Fringe Elements Tatting Group and the Beginners Tatting Chat Group on Facebook.

Terms
C- Chain
p- Picot
mp- mock picot.  Leave a space on both threads to make an imitation picot.  In this pattern it’s a vsp you are imitating and you only need a small space.
R- ring
vsp- very small picot
lj- lock join.  Make a lock join by using a crochet hook to pull shuttle thread through the joining space.  This creates a loop and you pass the shuttle through the loop then tighten to remove excess thread.  In these patterns a lock join is often joined to the space between chains.  Where to do the lj is indicated in brackets.
LS- lock stitch, I do first half unflipped and 2nd flipped but you can do the opposite and it will work.   Number beside indicates how many you to make.  Needle tatters there is a note below on how to make a lock stitch.
SCMR- self closing mock ring.  See http://www.janeeborall.freeservers.com/SCMR.pdf for instructions. 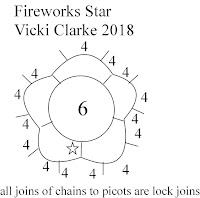 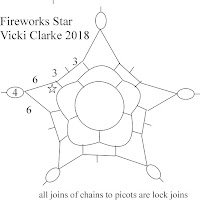 At this point you have 2 choices-
1. You can stop now and add a red and white fringe to the picots on the SCMR then fray them
2.  Make the “fireworks” using a bangle

For theme you will be using red and white thread.  If you have any pieces left over from the Very Canadian Tat-A-Long this is a great opportunity to use up the ends.

*You will start by joining to a picot on the tip of the star.
LS       4 (you may need a few more and don’t worry if the lockstitch chain bends a bit…they’re fireworks.  You are aiming for the star to sit in the middle of the bangle)
Now you will pass one thread in from of the bangle and one thread behind the bangle (this is called an alligator join)
LS       3
Cut ends and fray with a pin.*  Don’t worry, the lockstitch will not unravel but if you are worried you can always add a dab of clear glue.
Repeat from * to * adding fireworks at each picot.  In the sample I alternated red and white and made 3 sets of fireworks at each picot.

NEEDLE TATTERS!
To make a lockstitch chain you will make the first half on the needle, slide it off and do your closing stitch.  It seems awkward at first but you will get into a rhythm. The lock stitch chain will be a little annoying but so worth it!

Posted by victats@gmail.com at 4:32 AM 3 comments: 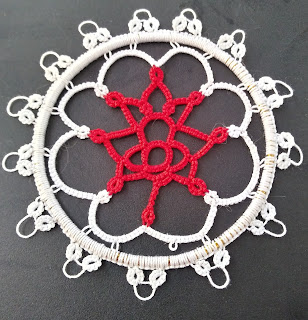 We have arrived at Day 3 of the Tat-a-long!
Just a reminder that there will be a bonus pattern posted tomorrow.
If you are a relatively new tatter I encourage you to be brave and try tatting around the bangle.  I have provided you with a couple links to help.
You can download the file here or find it at the Fringe Elements Tatting Facebook page and the Beginner's Tatting Facebook Group. 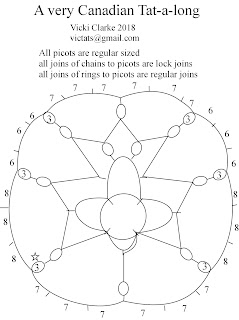 For today you need 2 yards of white thread wound CTM on a shuttle.

Start at first ring left of the stem.

If you have a bangle:

Fill a shuttle with thread and cut from ball. You will catch the picots at the same time that you are tatting around the bangle, see the Tatsaway link provided for help on catching the picots.  If you are not comfortable with making the rings then just tat around the bangle
(remember that W= wrap) http://www.janeeborall.freeservers.com/CoveringCaboneRing.pdf
https://tatsaway.blogspot.com/2007/09/wrapping-plastic-ring-with-double.html
https://www.youtube.com/watch?v=TofWCMBcT0I

I find it easiest to start with a ring.

Please note that the bangle is not in the diagram

Posted by victats@gmail.com at 4:37 AM No comments: