I'm fiddling around making Christmas stuff while watching Wolfman.  Really I'm just watching the Space channel because Dr. Who is on next. 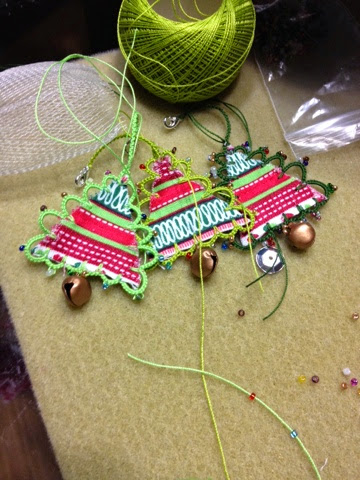 Posted by victats@gmail.com at 5:52 PM 5 comments: 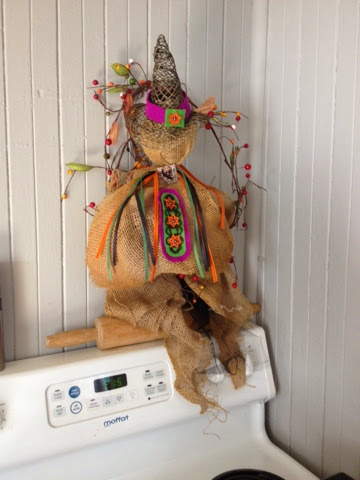 Happy Halloween!
Posted by victats@gmail.com at 2:54 PM No comments:

Wow! Summer has raced by and I'm left wondering what happened.  Now that the leaves are falling and Thanksgiving has passed (I'm Canadian), I can catch up on my tatting to-do list.   I had an email a few months ago expressing frustration with the Crabby the Sugar Skull pattern.  I promised to try and make it a little easier to follow.  Unfortunately I just can't get a good diagram so I've added a few pictures that should help.  I also changed the way you tat the pattern to make it easier for beginners.  The updated pattern is on the side bar under Crabby the Sugar Skull.  Let me know how it goes! 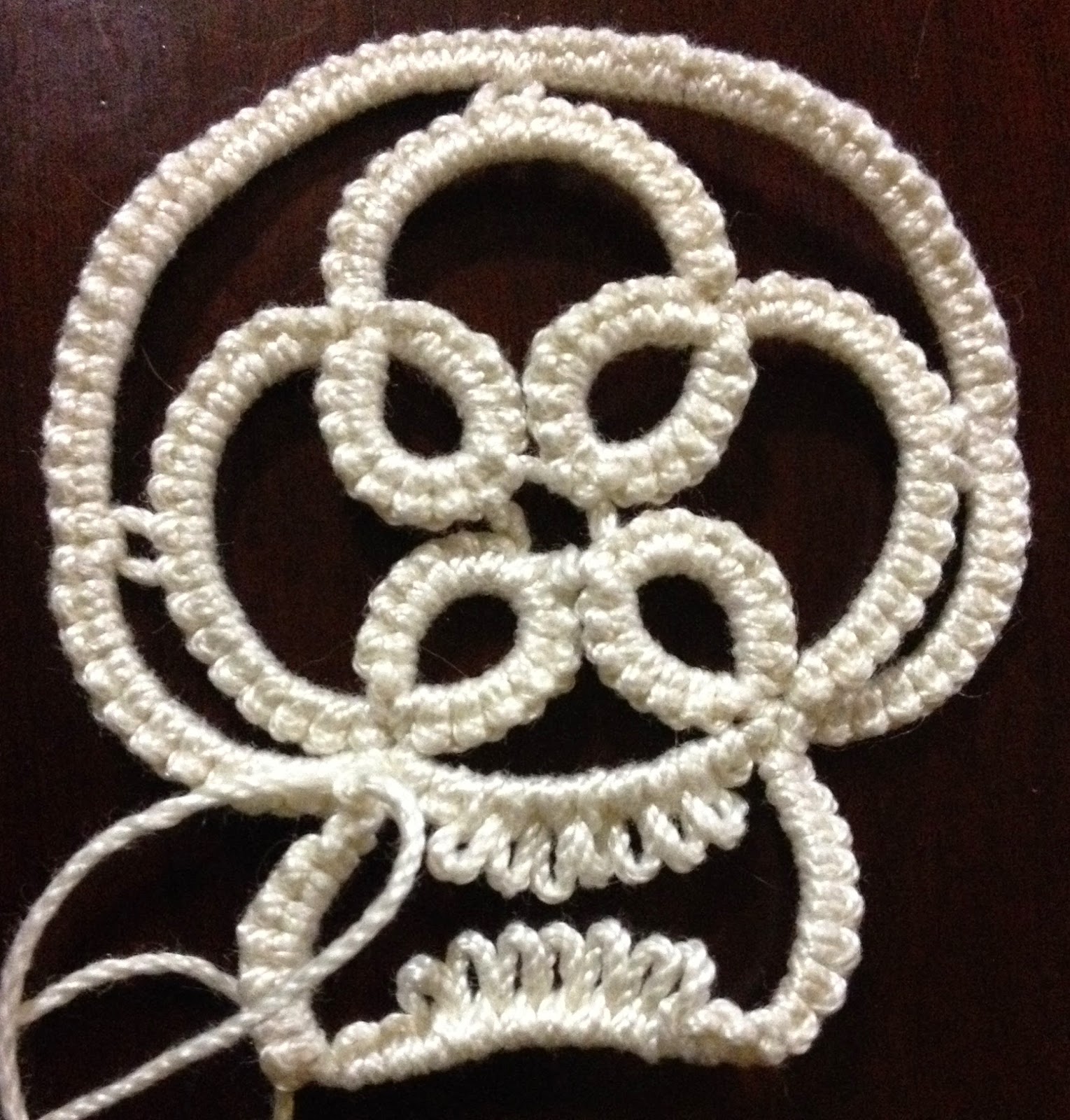 Posted by victats@gmail.com at 12:48 PM No comments:

A few words from an admirer 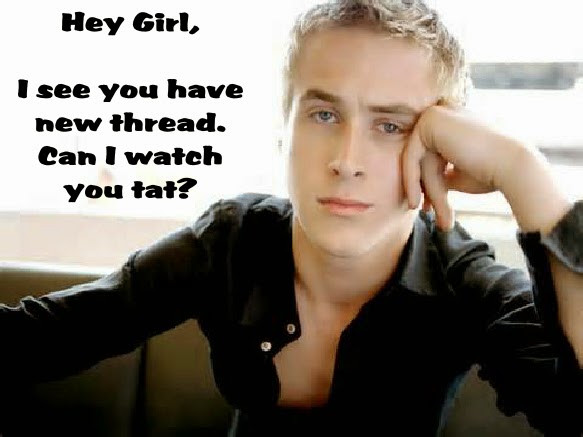 Posted by victats@gmail.com at 7:20 AM 7 comments:

I spent the weekend getting ready for my trip to Lodi for the Finger Lakes Tatting Seminar on April 4,5 and 6th.  There were a few things that I needed to get ready.   There's kits for the class I'm teaching so they needed to be finished and every year I bring a pattern and kit to donate to the fundraiser.  So I worked on getting that together.  Audrey sells them for $1 and the kits come with everything but a shuttle. 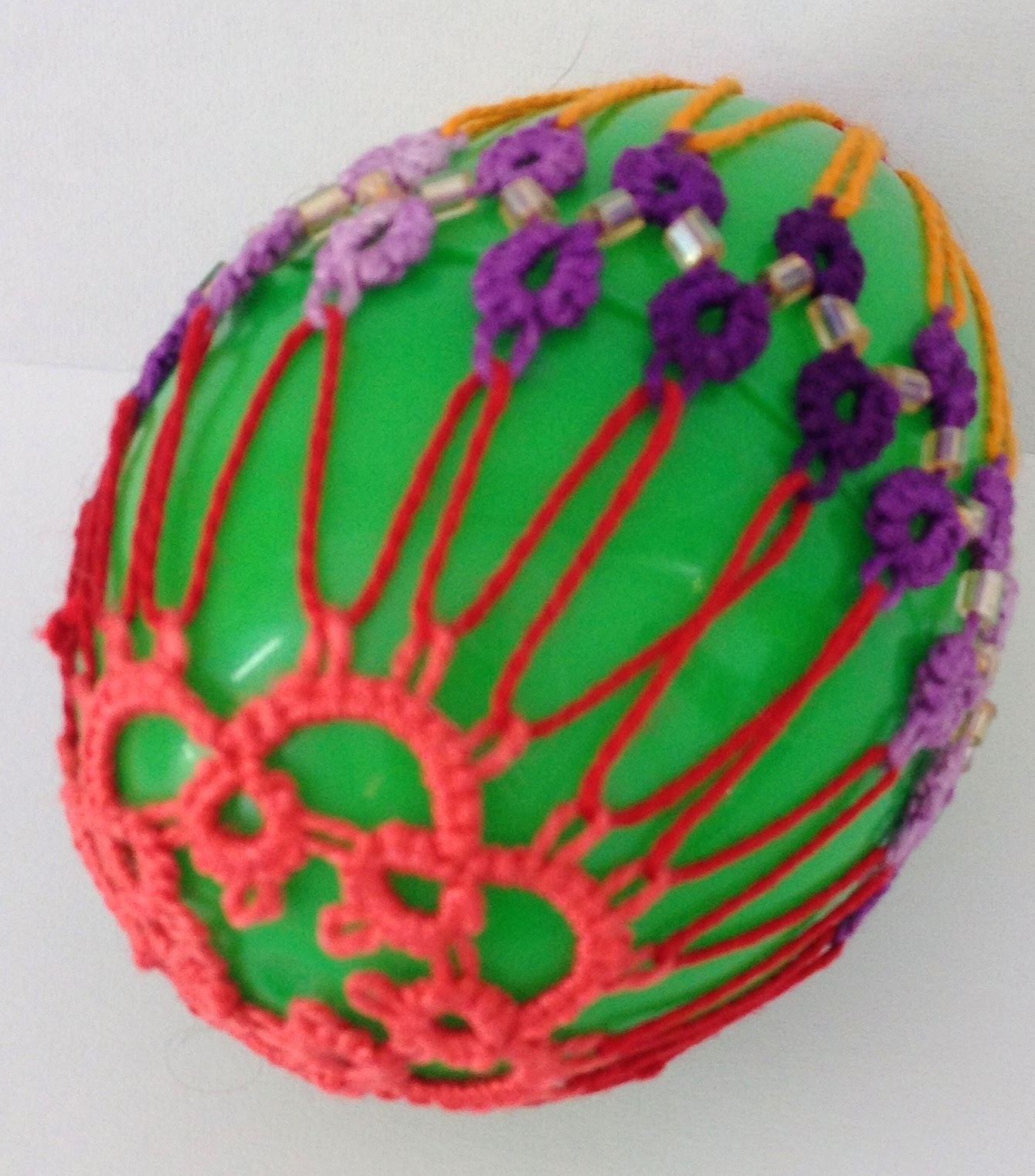 This year I was inspired by surplus Easter eggs and DMC thread to make an Easter Egg Kit.  Its a lot of fun to decorate these eggs and I kinda became addicted.  I made a bunch before I had to stop.  The motifs I used for the eggs are generic rings and chains but they look pretty when laced on to the egg.  The more colorful they were the better they looked!  Hopefully people will be interested in trying out the project.

The biggest thing I did to prep was make an inventory of my threads and books.  I have enough Lizbeth thread that I'm afraid I'll buy duplicates.  In fact, I found out that I have 2 balls of dark fudge!  I also found out that I have 73 tatting books, which I think is a lot.  I think I'm done purchasing books for awhile unless its a book out of circulation  or a silent auction win...or really cool.

Finally, I've been working on Renulek's Spring Doily 2014. I haven't made a lot of progress because I've been working on the kits but its gradually growing.   I wish that I had made this round a turquoise instead of orange.  You can't tell but according to the Lizbeth color chart the white color is actually Country Turquoise Light.  I think it would be pretty to add a few rounds of solid turquoise. 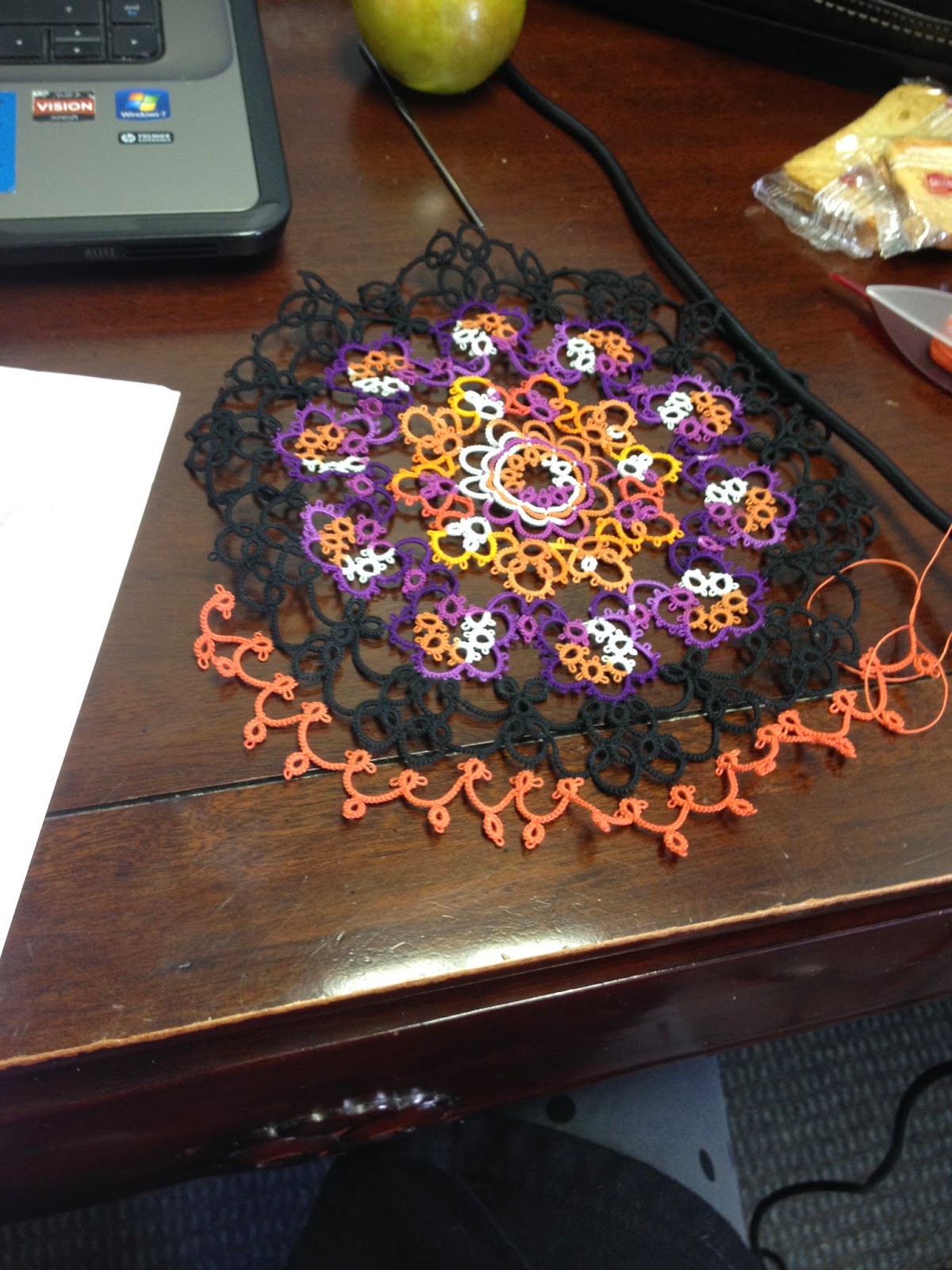 Posted by victats@gmail.com at 7:44 AM 4 comments: 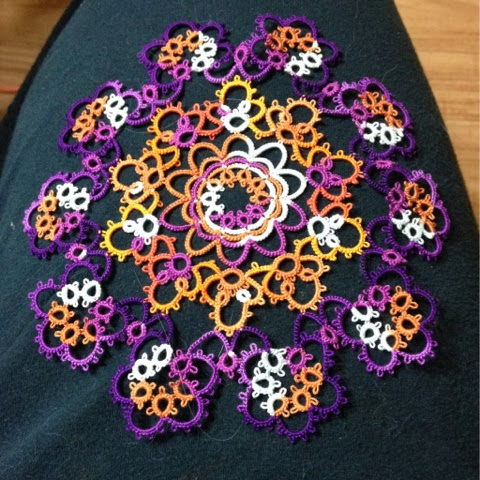 I've joined the group of tatters making the 2014 spring napkin by Renulek.  (Renulek .blogspot.ca). I'm on round 4 but I keep trying to skip ahead of myself and join to the wrong places.  I've also been inspired by others tatting the doily to go bright.  I'm using rounds 4,5,6 to ground it with black after doing the first 3 rounds in orange and purple.
Posted by victats@gmail.com at 3:47 PM 6 comments:

I'm still working on the doily (Swirly from Doily Delights by Karey Solomon) I showed you in the November post.  I finished that round but can't figure out what color to make the last round.  I am thinking either a gold or green.   In the meantime I've made a few other things.  One is the doily below using Karey Solomon's hand dyed thread and her doily from Doily Delights.  The doily is called sweet summer.  Unfortunately I couldn't get a picture that shows off the colors of the thread.

I asked my nephew (Jack, 5 years old) if he wanted the doily (you never know with kids) and he took it right away to put it under his sailboat night light.   He was really quick about it.   I think he knew what to do with it because his sister (Julia)  got a doily for Christmas.  I gave Julia the Beatrice doily (picture below) from Iris Neibach's book Tatted Doilies. 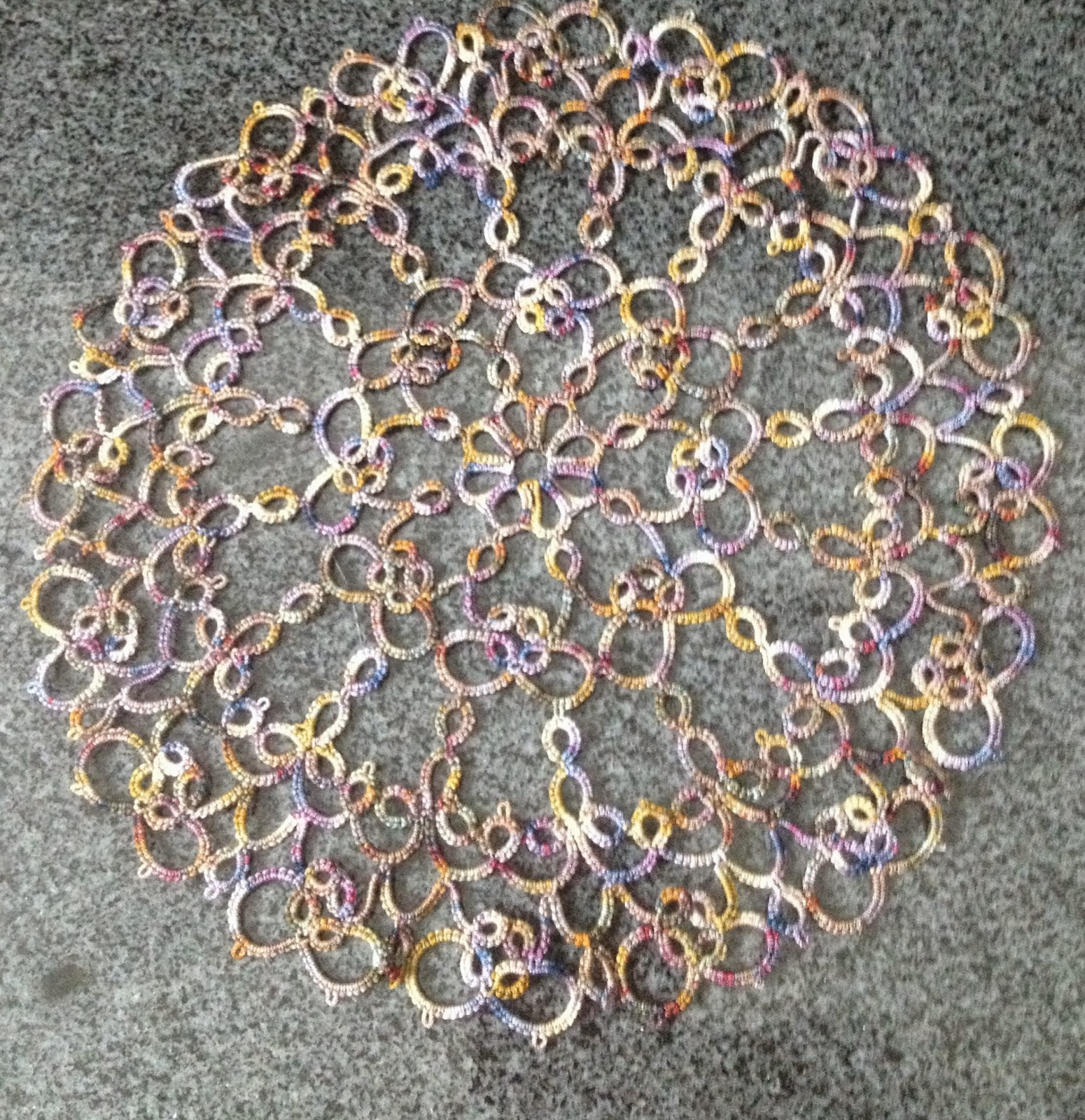 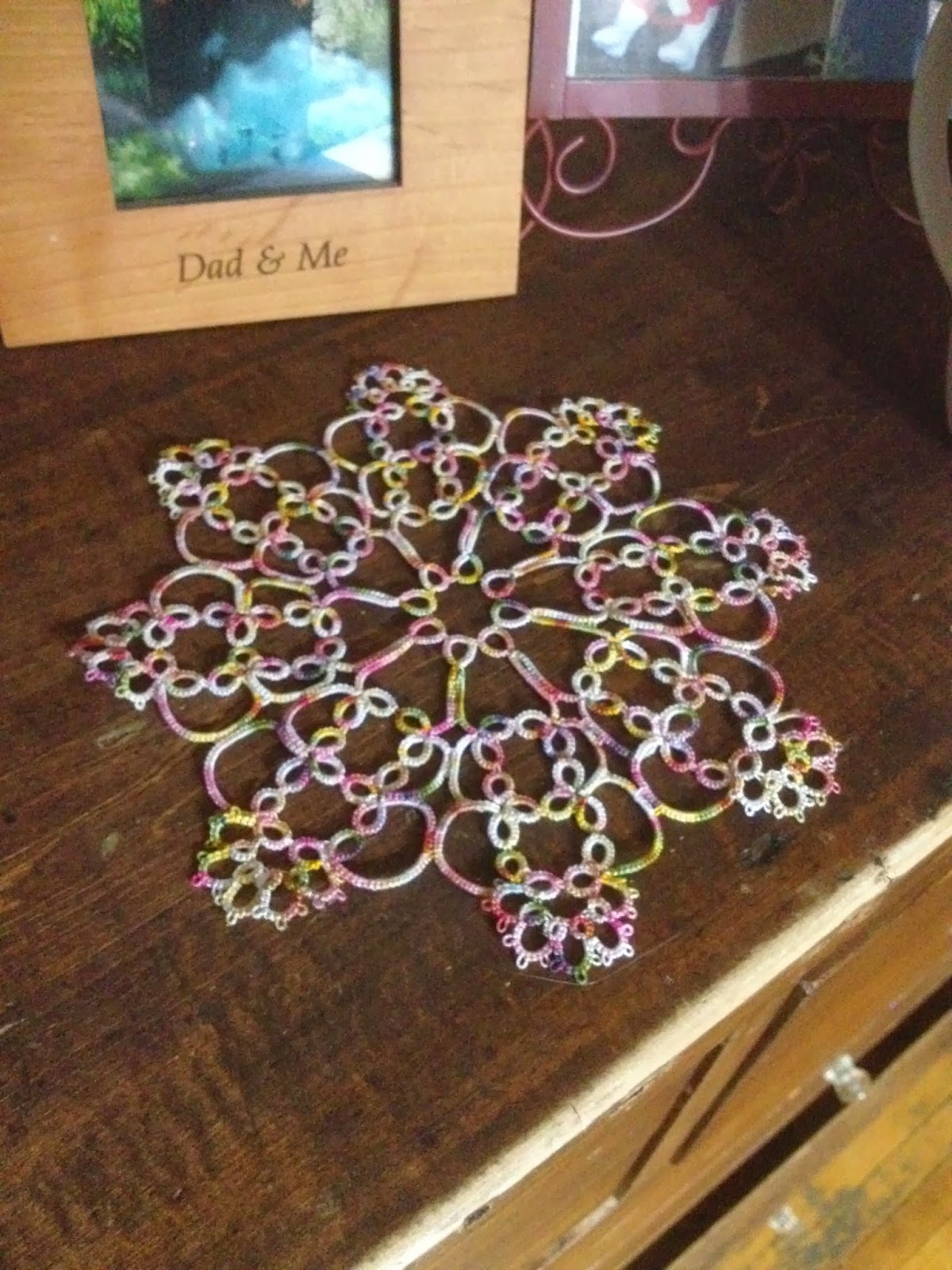