Ever since I got my own laptop I've been lazy about posts.  You would think that it would be easier to use my own computer instead of the one at work.  The catch is that I don't own a scanner and I'm an indifferent photographer.   I end up with no photos to go with the posts and you can't see what I'm talking about.  Of course I can just randomly write whatever is on my mind but I like photos.
So today I looked for stuff to share that you haven't already seen and found this picture on my laptop.  I meant to post it in February and ask what that did they look like to you?  I was trying for roses but wasn't sure if I was delusional.  In addition, I was trying to figure out a way to make the roses into a doily without losing the rose in the pattern.   I don't think I needed to be so concerned...Pier One Imports wasn't worried about losing the rose in the design when they did their rose placemat. 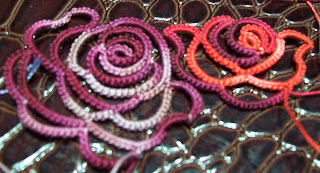 The roses really show off  Yarnplayer's hand dyed thread and the color changes.  The one on the right is done using Olde Rose and the smaller rose is done using Pizazz.  I've yet to try the pattern with a solid color so I guess that's the next step.  I have a vague picture in my head for a doily but I don't have the right colors in Lizbeth thread right now.   That means its on the shelf until I go on a purchasing spree for greens and rose like colors at the Finger Lakes Tatting Group seminar.  I have to start compiling a list of needs now so I won't miss anything.
Posted by victats@gmail.com at 12:27 PM