I had some people ask about the motif in the last post.  It's called Small Motif 2007 by Jane Eborall.  If you click on the name it will directly open to Jane's pattern.  I did it with 2 colors but otherwise followed Jane's pattern exactly.
Today I spent the afternoon cooking and tatting while things cooked.  I finished a doily by Karey Solomon called Cinnamon Cruller.  Its from her book Sweet Knottings.  Karey made her sample using size 40 thread but I used size 20.  The variegated thread is Karey's, I think it was called playground?  I loved making the center although I wasn't sure it was going to work.  I kept double checking the pattern to make sure I was doing it 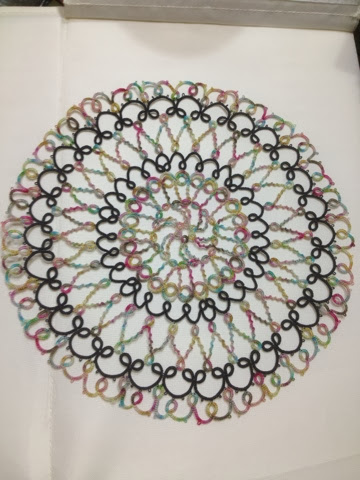 correctly.  The center doesn't look right until the very end of the first round.  All the half stitches in the third round were tedious.  I enjoyed tatting the pattern and will tat it again in the future.  There's a doily called Swirly in Karey's most recent book of doilies I want to do first.
Posted by victats@gmail.com at 5:32 PM