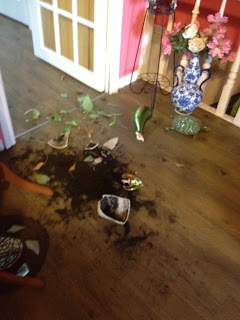 I woke up at midnight last night to my dog barking furiously.  Kneessa spent the next few minutes trying to convince me that the plant stand was a dangerous hazard.  That's why she had to kill it. I've cleaned up a little in the picture but there was bits of my poor plant all over the floor.  Apparently it was a viscous plant.  Its amazing the amount of damage a 5lb dog can do in a short time.
I should have made a bigger deal out of it but instead I went back to sleep.  I will regret it later.  She is convinced that everything in the house is for her chewing pleasure including thread.
Posted by victats@gmail.com at 10:40 AM