Did you ever read the book by Steven King? I did when I was a teenager (I think I've since doubled my age). Anything that's not a necessity but that burns you with want I call a needful thing. Something you really don't have a use for and really can't afford but you buy it anyways.

Lately for me that's been thread. In the last few weeks I've been buying Lady Shuttlemaker's (Sherry) hand dyed thread. This means that I have to find something to do with it. Never fear I have willing hands (for the most part) and time to sit in my porch and tat away. Unlike my garden tatting projects actually can be finished. 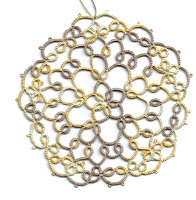 Using butter toffee I started tatting the pentagram motif I used a few posts back. I added an extra round and then had to stop. The last round caused the doily to cup a bit. No worries, it lies flat when coaxed. After considering the situation I think that the cupping is 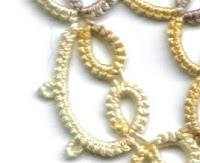 caused by this section. If the rings or the picot were larger then I don't think it would have cupped.
I found a use for my cupping doily/motif by sticking it in a backless frame. I cut out a black felt mat to provide contrast because I didn't think it would show up against my wall.
Posted by victats@gmail.com at 1:04 PM