This is the finished first round of the snowflake. As you can see it is a little lop 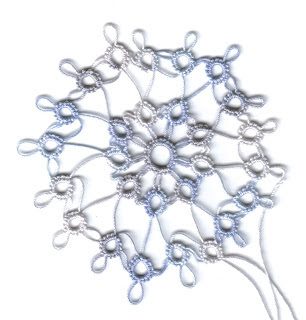 sided. I don't think that I will do the outside round, instead I will used this for something else. I am going to do another version of this pattern but will change the picot size as well as the spaces between the rings. I may also add beads to hold the space between the rings constant. I think part of the reason I'm not crazy about this kind of pattern is that I usually don't need to block a piece. This style definitely needs to be blocked and stiffened.

I forgot to include this bookmark when showing you what I sent to Meme for the round robin exchange. Instead of doing a traditional tail off the top or the bottom of the heart I tatted around to the side of the heart and then did the tail. It doesn't show up in the picture but where it curves around the outside of the heart looks like little waves. If you do 4 hs and 1 ds it creates a curving wave effect.