Dropped out of sight

I feel like I've dropped out of sight the last few weeks. I haven't posted because I didn't have any photos to share. I don't read blogs with no pictures so I always try to include some sort of picture on mine. Yes, that means that if you don't post a picture I won't read what you post. I'm ashamed of my shallowness but what can you do? Instead of pictures I'm sharing a few thoughts worthy or not about what other people are posting.

Fox has posted a good idea and followed it up with some action over http://www.tat-ology.com/. She's put together a way to exchange thread informally over the distance through this blog http://thethreadexchange.blogspot.com/. The beauty of this exchange is that you know who's making the exchange with you. If the thread doesn't arrive you can contact your exchange partner directly to resolve the issue. I've been doing exchanges long enough to get burned a few times. Its no fun to wait for a package that never arrives. I have great sympathy for those who are brave enough to organize an exchange. Herding a bunch of tatters is probably like herding a bunch of cats!
One of these days Totusmel (http://totusmel.blogspot.com/) is going to give me a kick in the head because I keep giving my 2 cents worth about her designs. I am amazed by the way she uses tatting. She's just finished a really neat flaming mask. So much different than what I could even imagine.

I've decided that cruelty must be a chief characteristic of test tatters (you know who you are). Why else do they flaunt patterns not yet published and taunt us with their blocky goodness? I've been seeing a lot of Martha Ess's newest block critters on different blogs. Her newest book is due out in August just in time for the Palmetto Tat Days.
Just so you all know I'm going to steal Jane's earrings the next chance I get...probably won't get the opportunity for a couple years. I'll post you when it happens. http://janeeborall.blogspot.com/ (so you can see pictures of the earrings)
I was going into withdrawls when Tatting Goddess stopped her regular posts. She's back at it if you haven't noticed. However, I didn't read her post today because there wasn't any pictures! (kidding)
Did I mention that Sherry ( http:/ladyshuttlemaker.blogspot.com) is severely knocked up? So is my sister and they are due around the same time. A few other people I know are pregnant and due in the fall. I don't usually know so many fecund women... Even though there's a 1/12 chance of being due at the same time I've decided all these pregnant woman are a sign the stars are aligning. For what I don't know! By the way, I mean Sherry as in the shuttlemaker and not Sherry as in the celtic dreamweaver (http://celticdreamweave.blogspot.com/).
Finally I lied and found a few pictures I haven't shared. They are both Mary Konior's patterns and tatted in Sherry's hand dyed threads. I love single shuttle patterns! 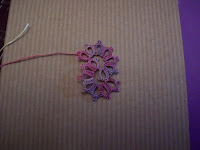 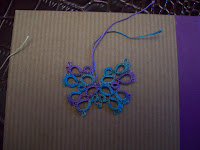