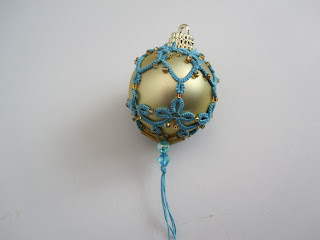 Sally's favorite was Jane's butterfly but since her sister Jane already chose that she went for her bauble at: http://tatsheaven-churchlog.blogspot.com/2009/12/christmas-baubles.htmlchurchlog.blogspot.com/2009/12/christmas-baubles.html . To find the pattern look in the right column, they're so fun. Its so nice to see sisters getting along and sharing, the same situation with my sister would result in a death match! (just kidding) 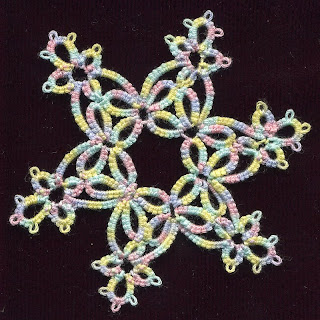 Isdihara's favorite pattern at the moment is Wendy Durell's 4 ring snowflake. The pattern can be found at http://www.durell.me.uk/Tatting/4%20Ring%20Snowflake%20diagram.pdf

Connie's contribution was "Erin H. tatted last year in church and is one of today's online tatting class patterns that she so kindly donated and named Connie's Snowflake. (I liked it even before she named the snowflake) You can find this snowflake at: http://www.georgiaseitz.com/2009/erinsnowflakepattern.html"
Gina thought about it for awhile then came up with her answer:
"Okay.....one year I was in a Christmas RR tatted ornament. I used it as an excuse to tat the motifs from Pam Palmer's Tatting Treats. I think that collection is my most favorite of all. The rocking horse, the teapot where you can put your own motif in the center(I used a holly sprig), the Christmas tree, the caroling mouse, a bell....and fairly easy. I also LOVE the chain tree from Sue Fuller's Potpourri of Tatting. So easy, so fast and so pretty. I've also done a wonderful tree by Julie, an Australian tatter who doesn't show up much these days. Can't say I have a favorite snowflake. Have never tatted a snowman. Not that keen on tatting wreaths. " You know you see these books but you just don't know if you should buy it. I'm going pick up Pam and Sue's books the next time I've got the chance. 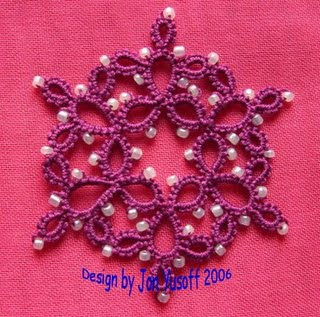 Trayna said...
My favourite Christmas tatting pattern (thou I haven't done it this Xmas & can't do it now ;( ) is Jon's Rings Only Snowflake with beads http://tatsaway-patterns.blogspot.com/2008/08/rings-only-snowflake-with-beads.htmlI love the way it looks and how it flows as you are making it.See Jon's photo on my bloghttp://trayna.blogspot.com/2009/12/secret-santa-update-vics-bribe.html 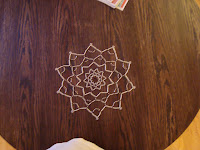 So here's my additional bribe, forgive the picture quality. The last bit of incentive is a doily similar to the one in the picture. The colors are yet to be determined but its about 12 inches in diameter. If you are wondering what I'm talking about check out my previous post at http://victats.blogspot.com/2009/12/favorite-christmas-patterns-and-bribe.html) 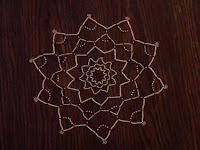