Inspired by the onset of Halloween I picked up some black thread, orange beads and tatted. Any ideas what to do with these? I was thinking maybe bookmarks or sewing them onto something? I tried tatting a moon to sit behind the hat but I'm not sure that I like how it looks. I'm not sure its clear that its supposed to be the moon. I think there's a bat pattern around on the Internet that would look much better on the moon than my hat.

As you can probably guess by the number of hats made, the hat is very simple to make. The only tricky part is that I used Martha Ess's folded rings to make the peak on the hat. If you are not aware of this technique she generously shares it on her website Tat's Amore. I've also used her method of notating the folded ring.

The hat is made of a fold ring followed by a series of chains. Sting 10 beads and wind about 6-8 inches on shuttle, CTM. All the beads will be used on the ring. All joins are ball thread joins.

Whew! Just remembered why I never write out patterns. So difficult to communicate something as simple as the hat. 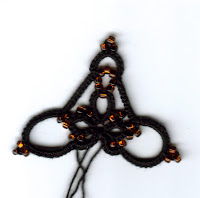 For me, witches hats and pumpkins symbolize Halloween the best. I made one more hat but I think it looks more like a wizard's hat than a witch's. I think it would look better in purple with silver beads. What do you think? If I turn the picture around, it kinda looks like a monkey's face.
Sorry, one more question. Do you think that black hats are like black socks- they never get dirty? 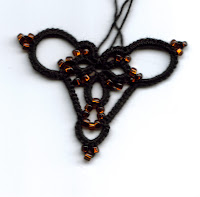 Posted by victats@gmail.com at 7:31 AM